I have had this issue for more than a year.  I have 2 Sony 4k TVs, one has the Roku Ultra, the other has the stick+ and intermittently I get the purple screen on both.  Usually it happens on Hulu or DirecTV Now.  I don't use YouTube.  It seems random and happens about every 2 or 3 days.  A reboot fixes it but it is annoying.  I also use FireTV and it doesn't have this issue.  This does seem to be a Roku firmware issue related to Sony 4k TVs.
Top

Seems like Roku is having a hard time figuring out what display modes are compatible with my Sony KD-50X690E.

Hello @donb
I have the same TV. Have you tried using the roku on HDMI 1? Mine will not work at all on HDMI1. I get the HDCP error on everything and sound is non-existent at all. I tried so many times all the troubleshooting steps of unplugging, powering off, factory resetting, using different cables, nothing works. Roku support is absolutely ATROCIOUS they they spew the same crap. One even told me to just go buy a new TV. Seriously? Anyway, since I got mine through Amazon, they accepted my return and I got another to try. It worked right away and I had sound the whole way through the set up until it auto updated then it went dead again.
I think the current update for the Roku Stick+ is screwing things up. I think that despite whatever non-4k setting you have it at, the Roku still sends out HDCP 2.2 signals so my HDMI 1, which doesn't support 2.2, just stops working properly. It's SO freaking frustrating.
Top

Yeah HDMI 1 doesn't work because it doesn't support HDCP. I figured that out quick enough. Then read the owners manual which confirmed it.

Well ever since I changed the Streaming Stick+ Display mode from Auto detect to 4K HDR 60hz TV, it's been working fine. Maybe I should knock on wood though.
Top

I have also had some luck in avoiding the HDCP purple screen.  As I had mentioned previously I currently have my Stick+ connected to my Sony TV with the free small HDMI extension cable that I got from Roku.  I have also stopped using the YouTube channel on the Stick+ and use the native YouTube app on the television instead (based on the post from donb about the changing resolutions while streaming from YouTube on the Roku).

Its has been almost 1 month since I got the HDCP purple screen, whereas before the above changes I would be getting it approximately 2-3 times per week.  I can't say if what I have done with YouTube and the HDMI cable are the reasons for not getting the purple screen but I plan on just leaving it as is for now.  Maybe in the future I'll experiment with just one and/or the other and see what happens . . .
Top

Well sorry to say but the error has returned out of the blue.  It was working just fine ever since my last post.

I haven't tried it on YouTube but its giving me the error with the Roku Media Player.  I have a lot of video content in MP4 format that I watch.  I have had no problems with these same videos until now.  I was watching them without incident and now this HDCP error is back to haunt me.

Sorry to hear that your problem is back.  Luckily (at least so far) I have not had the purple screen HDCP error for more than a month and a half now. In my last post I mentioned that I had done two things different : 1. not use the YouTube app on the Stick+ and 2. used the free HDMI extender from Roku to plug the Stick+ into the TV.  As an experiment I eliminated the HDMI extender from the equation about 2 weeks ago and just attached the Stick+ the way it was designed - directly into the TV.  I still avoid using the YouTube app on the Roku.  So far - HDCP purple screen free!!

I still can't say with certainty that the YouTube app was causing my problem but I'm pretty sure that it was at least part of the problem.  Hopefully, I'll continue to not see the flower purple screen!!
Top

YouTube is working but not Roku Media Player.  But the next day, it was fine.  I think there might be some heat related issue going on.  Yeah I got that free extender from Roku.  Its just a very very short HDMI cable.  I was watching TV all day and the problem did not appear until late into the night.  I am really starting to think its heat related somehow.
Top

I mounted heatsinks to my Streaming Stick+.  Let's see if that helps keep the temperature down. 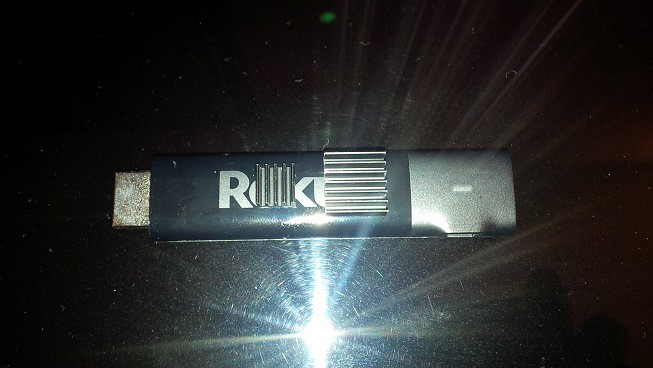 Got the same problem with my Streaming Stick. It's worked beautifully with my LG OLED55B7V since i bought it months ago.

It changed when i turned on "HDMI ULTRA HD Deep Colour" on my TV and switched to "4K HDR 60Hz TV" on my Roku. Now this HDCP message pops up multiple times a day.

I've reverted my settings so we'll see if that resolves it but surely this has to be a Roku issue. If this continues it will simply become unusable and we'll have to go back to Apple TV or something.
Top

Maybe you can try all of the Roku display modes until you hit the one that works. That's what I had to end up eventually doing.
Top

Thanks. Yeah in the Roku display settings it actually says that the 4K display options require HDCP, where as the 720 & 1080 options do not.

I'm convinced this is a Roku issue.
Top

Yeah its definitely isolated to the Roku but I fixed mine by manually selecting the display mode.  Others had to use that free HDMI extension cable from Roku.
Top

It's a shame because for the first time I have equipment that is capable of running maxed out (4K HDR 60fps) but i have to downgrade to 30fps. Roku need to acknowledge this.

PS. I'm actually a little ashamed at myself for making that complaint

Users browsing this forum: No registered users and 35 guests
×