At this point a strong antenna, like the one I recommended, should easily gather signals through the roof and those trees - should being the operative word. As more collective experience checks in the recommendation may change... or not. We're not there with a van full of equipment to try this stuff, so... we'll just wing it... and show up with enough big guns to get just about any job done.

The first post in this thread illustrates what happens to a man who is just tired of messing around...

Thanks for the information. I have an accessible attic space on the second floor that runs the length of south side of the house. The house has an asphalt shingled roof and aluminum siding.

I had Dish Network several years ago and one day it just quit working. I had them send a tech out and they determined that the culprit was huge trees behind my neighbors house blocking the signal. I cancelled the service because I didn't think my neighbor would foot the bill for cutting down a couple 100 year old oaks so that I could watch a football game. I was never sure if the techs (they sent multiple) assessment was accurate or if they were just lazy and didn't want to relocate the dish to a proper location.
Top

You don't necessarily have to get on your roof to get an antenna outside... Often around here I see people put them on the ground and lift them 10 feet after 10 feet of mast until it is up, then strapped to the side of the house... There is nothing like an outside antenna if you aren't in city limits...
Top

A cloud can stop a satellite signal in it's tracks, so can a tree. TV signals, on the other hand can punch through, or bounce off those obstacles.

The aluminum siding is a deal breaker for anything in the house proper, but the attic seems like the place. I have installed many antennae in an attic and it's great because you don't have the weather beating the crap out of your reception equipment. I trust you do get 'weather' in MI? Yea. A little, maybe.
Tony
Roku 2 HD
www.youtube.com/user/TheFishMojo
Top

ACraigo wrote:
A cloud can stop a satellite signal in it's tracks, so can a tree. TV signals, on the other hand can punch through, or bounce off those obstacles.

The aluminum siding is a deal breaker for anything in the house proper, but the attic seems like the place.

Michigan's latitude is between 41 and 47 degrees north so the angle above the horizon to the geosynchronous satellites is (using an average) about 44 degrees which is lower than I have experience with but it still should be possible but the location might need to be as high as possible on the northeast side of the house shooting over the roof and then over the trees.

Geometry is not generally a strong point of satellite installers and neither is creativity so it is not surprising that the people Dish sent out were stumped. Also I "think" most of the Dish satellites are further west than the DirectTV ones but it has been years and I never dealt with Dish so I am not sure.

From what I read from ACraigo I think you will be able to get OTA OK by antenna so discussion of satellite is really probably moot.
Two Roku Ultras, three Roku 3s and a Roku 1
"Part of the secret of success in life is to eat what you like and let the food fight it out inside." Mark Twain
Van Roy's Law: An unbreakable toy is useful for breaking other toys.
Top

BTW, firedup... I ran across one of these in a search today - http://www.amazon.com/AntennaCraft-10-E ... 58SZZDBQ8P - solving the mystery of the two lower antennae.

That's kind of funny looking for vhf -- usually they are very broad. I wonder if those loops act like really long elements.

I have one more mast experiment before I retire from the OTA hobby. I will be raising my mast five more feet and putting a db8e at the top with one element just east of south and the other just wast of south. Unless I get an exceptional improvement, I'm going to revert to 91XGs and Y10-7-13s in the attic -- which worked great anyway.

Then, except for replacing my aging DTVPals with DVR+s, I think I am going to declare victory in my war on Comcast and sit back and watch some television.
http://freetvforme.wordpress.com
Top

I wonder if those loops act like really long elements

Folded Dipoles for the low end being helped along by parasitic elements for the high end I guess. At 9dbi gain, and one of the strongest antennas in it's band, it works.

I've got a Mohu Leaf--simple & effective. I get all of my local channels, which wasn't the case before I got the Leaf. Any more channels/stations from outside my area would just be duplication. The picture & sound are perfect 99% of the time, especially for the PBS channels, which are the only ones I really care about.

RockYou wrote:
I've got a Mohu Leaf--simple & effective. I get all of my local channels, which wasn't the case before I got the Leaf. Any more channels/stations from outside my area would just be duplication. The picture & sound are perfect 99% of the time, especially for the PBS channels, which are the only ones I really care about.

At least, for 40 bucks, you didn't get hurt too bad. Apparently, in your location 'all you need' are TV stations under 20 miles from your antenna and in that case a tuned 10 cent coat hanger would have performed equally well.

Mohu Leaf claims 15 dbi gain - which is fresh, unfiltered, puree of hogwash. A leaf antenna has almost 0 gain. The amplifier might have 15 dbi gain, but I don't even know what that means. The antenna we were just talking about - http://www.amazon.com/AntennaCraft-10-E ... 58SZZDBQ8P - is a VHF high band (ch 7-13) antenna with a real gain of 9dbi which is an enormous amount of gain for an antenna in those frequencies. That kind of gain can't be produced by a leaf antenna and that means Mohu is either misrepresenting the truth, or telling a flat out, bald faced lie. 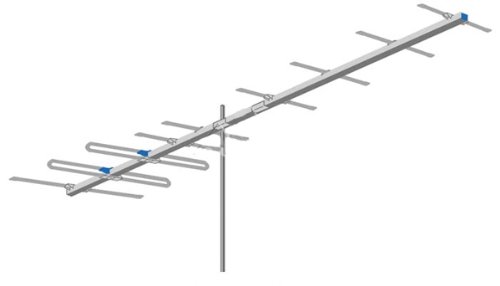 You have done yourself a solid however, by putting up an antenna (no matter what it is) and receiving free Television that probably looks better than anything you could stream. You didn't have to erect an antenna array like the one pictured on the roof above, nor endure the visual assault my living room equipment and blue tape would inflict on a 'normal' human being - and that might have been worth the 40 bucks. In the end, you are to be commended. Hat tip to you.

This thread is dedicated to 'antennaheads' - those folks who are willing to go to extremes, in varying degrees, to get free TV. You are one of us. Welcome aboard. If we had met before you got your leaf we could have gotten you some plans for a home made antenna you could have built for pennies, a little more if you had to go out for blue tape.
Tony
Roku 2 HD
www.youtube.com/user/TheFishMojo
Top

Well, the fact is that my "10 cent coat hanger" (old rabbit ears + bowtie) that I'd had for several decades before and which only picked up most of the local channels and only the "big 4" affiliates (ABC, CBS, NBC, PBS) OK most of the time did not perform equally well. My reception across the board was greatly improved by the Leaf, as it was for my sister across town when I got one for her. My practical experience over nearly 60 years of watching TV OTA and fiddling with antennas tells me that the Leaf is the single best indoor antenna I've ever used. It was worth the $40.
Top

I understand. Your old rabbit ears and bowtie are probably cut for low VHF 2-6, high VHF 7-13, and UHF, having the same gain as the Mohu - 0 - it's just the Mohu is cut for the frequencies you probably need to get. That can make all the difference and in your situation where TV signals are very close, a properly cut antenna is all you need. Luckily, you found one and only had to pay 40 bucks for it. Well done.

The problem I have with Mohu is that from their advertising one would assume all of their antennae would work out in fringe areas where you need more than what you can tape to the window. Many people find this out the hard way and some find it out the hard way after paying in excess of 150 dollars for an antenna that simply won't work.

I would like to see your http://www.tvfool.com report, see what you're getting, and where you're getting it from, so if we have another person in a similar situation we could perhaps - in good conscience - recommend the Mohu leaf for 40 bucks. That's really not a bad way to go.
Tony
Roku 2 HD
www.youtube.com/user/TheFishMojo
Top

A lot of people like the Leaf. I haven't tried one. It's hard to argue with success...

Based on these and previous tests, I’d give the WallTenna, FlatWave, and Leaf a thumbs-up...I can’t recommend the NV20 Pro, though.

In the amplified crowd, the Leaf Ultimate and Sky both deliver solid performance.

Users browsing this forum: No registered users and 27 guests
×